The “5 to Drive” campaign highlights the five necessary rules that teen drivers need to follow to stay safe behind the wheel.

THE PROBLEM — TOO MANY TEENS ARE DYING Motor vehicle crashes are a leading cause of death for 15- to 19-year-olds in the United States. In 2013, there were 2,614 teen (15-19 year old) passenger vehicle drivers involved in fatal crashes, and an estimated 130,000 were injured.

Parents are the biggest influence on their teen’s safety behind the wheel. Parents need to take the time to talk with their kids about the many dangers of driving. Those dangers include:

THE SOLUTION—SPEAK UP AND TALK TO YOUR TEEN OFTEN You’ve guided your teen this far. Driving is a new chapter, a step toward independence for many teens. But your job’s not done. Surveys show that teens whose parents impose driving restrictions typically engage in less risky driving and are involved in fewer crashes. They can’t listen if you don’t talk.

SunCoast Traffic School believes the 5 To Drive rules for teens are a starting point for parents to begin having an ongoing meaningful conversation with their teen family members that may help prevent tragedy.

Driving Lesson Gift Certificates for birthday’s, holidays, graduations, and other special occasions are a great way to tell those special in your life how much you care about their safety while providing a gift that can last a lifetime. 352-279-6489 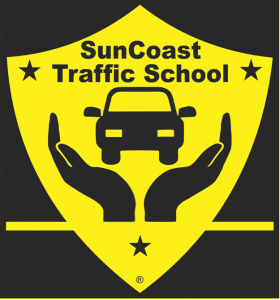 We Care About Your Safety

These rates will apply to all existing and new clients. While we strive to offer competitive pricing, these increases are necessary to cover the cost of increasing prices for cars, insurance, fuel, and vehicle maintenance. We look forward to offering you the professional training our clients have come to know us for. Thank you for your business and we hope to heart from you soon.

BY SUBMITTING THIS ACKNOWLEDGEMENT WITH MY NAME, I REPRESENT THAT I have read the foregoing “SCTS 2020 Driving Lessons Agreement and Student Information Sheet” and the “Wavier of Liability and Hold Harmless Agreement”, understand it and sign it voluntarily as my own free act and deed; no oral representations, statements, or inducements, apart from the foregoing written agreement, have been made; I am at least eighteen (18) years of age and fully competent; and I execute these Agreements for and on behalf of myself and/or my child for whom I am the legal guardian.